Games Day started with entertainment from the 47th Culter Boys Brigade Band before the traditional events started at 11am. Not long after, we had the honour and privilege to welcome our Royal visitor HRH The Prince Charles, Duke of Rothesay, who enjoyed with us the spectacle of the Lonach Pipe Band and the Lonach Highlanders entering the arena, their first visit to Ballater Games since 1987. They had marched through Ballater to the Games Park ahead of the combined Bands, which included our own Ballater & District, the Highlanders 4 Scots Pipes & Drums, and five others.

The Duke of Rothesay presented a Games Crest to Alan Mitchell who had served the Ballater Games for 50 years, before the combined Bands entered the arena to march past the Games Committee and salute the raising of the Games Standard by our Royal visitor, who had to then leave for another engagement.

Our traditional events, including a further appearance of the Highlanders, continued until it was time to welcome our other important visitor, our Chieftain, Captain Alwyne Farquharson, who had celebrated his 100th birthday earlier in the year, and was now attending his 71st year as Chieftain! With his party he entered the arena through his Honour Guard formed by men from the Queen’s Royal Guard, to be greeted by the Ballater and Lonach Bands. The Highlanders 4 Scots then entered the arena to play a new pipe tune entitled “Leal and Siccar” (the Games motto meaning loyal and certain), specially commissioned by the Games VC to celebrate the Chieftain’s centenary.

The Games Committee had commissioned a new trophy, again in celebration of the Chieftain’s 100th year, a silver plated “Chieftain’s Salver” to be awarded each year to recognise local excellence in one of traditional disciplines of Highland Games. This first year the chosen discipline was Highland Dancing, and the trophy was presented by the Chieftain to Abigail Gray from Ballater.

The Lonach Pipe Band and the Highlanders had come to Ballater to honour our Chieftain who is also one of their Honorary Vice Presidents. They made a presentation to Captain Farquharson of the first of the bottles of this year’s Lonach Whisky 2019, together with two engraved Lonach whisky glasses.

Our traditional events, and appearances of the Pipe Bands, continued in sunshine throughout the day, and were enjoyed by all, ending with our unique Tilt the Bucket fun.

With the help of all our wonderful volunteers, we had another great Ballater Highland Games which was enjoyed again by a huge number of Patrons and spectators. 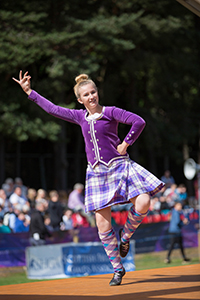