Ballater Highland Games were first instituted in 1864, with the first Gathering being held on Wednesday 27th July on the Church Green in Ballater. The Champion athlete that day was A. Grant from Birkhall, with firsts in several heavy events as well as firsts in racing and jumping. Soon athletes were attracted from further afield and the great Donald Dinnie appeared in 1868, setting new records for the heavy events.

In 1889, and as the Games grew in popularity, Monaltrie Park was chosen as a new venue – a spectacular setting between the crags of Craigendarroch on the one side and across the River Dee the pine covered Craig Coillich on the other side.

The latter hill features strongly in the annals of the Games. In 1946 a gruelling hill race was introduced to the Games, starting from Monaltrie Park, down Bridge Street, over the Dee and up, up through the pines. The runners can be clearly seen as they emerge from the trees on to the summit, thereafter returning to complete a last lap of the field.

Over the years there has been strong competition amongst the heavies, and our own Bob Shaw from nearby Glengairn became Scotland’s champion shot-putter. Records which were set by such renowned athletes as Arthur Rowe, Bill Anderson and Geoff Capes in the nineteen seventies and eighties stood for many years, and indeed Arthur Rowe still holds a record from 1985.

Strong sponsorship ensures continuing support for present day competitors, without which it would not be possible to continue the traditional Highland Games as we know them. Athletes, pipers and dancers come to these Games from all over the world. In the heavy events, one record was set at Ballater in 2004 by David Brown from California, whilst Sebastian Wenta from Poland set records in 2009, while Matt Vincent from the USA broke one of these records in 2015.

Our long-time Secretary, Edward Anderson (1956 – 2013), was a keen historian, and recognising the importance of blending the past into the present, Edward recorded much of the history of the Ballater Games. That sense of history persuaded Edward to suggest that Ballater Highland Games pursue the idea of having a coat of arms, and, largely due to his efforts, the Lord Lyon King of Arms granted arms to the Games in 1990. The coat of arms includes the Games motto which was once borne by the Burgh of Ballater – Leal and Siccar. The giant 7ft x 7ft banner bearing the coat of arms  is flown annually at the Games. 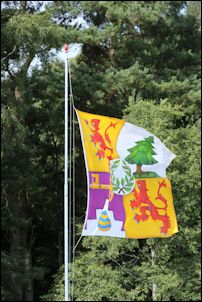 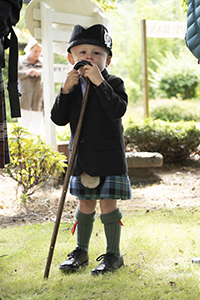